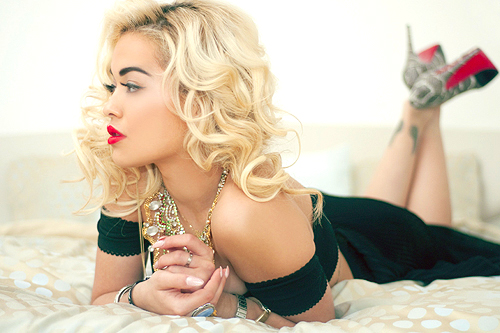 I guess the sexy British Rita Ora got sick of the rumors about her alleged love affair with her boss Jay z, The beef between her and rihanna, Her ex Rob Kardashian putting her on blast for sleeping with ” OVER 20 different men” so she stopped by hit radio show The Breakfast Club to spills all the tea and do some clearing up!

While sitting with the Breakfast Club crew the 23-year-old, who hasn’t made her mark in the US, revealed how she’s been able to rack up over $145 million in net worth so far (yessss honey I love a QUEEN) , She included  that she’s made this by her endorsement deal with Adidas, her Ora multi-services company,a few smart stock investments, chain of restaurants in London,property holdings,  and her very own soccer team in Kosovo called FC Prishtina. So miss Ora have been silently stacking cup!

She also answered what all inquiring minds have been wanting to know about her rumored breakups and affairs, beefs & speaking on the known fact that she dropped out of school

Check out the interview highlights below!

On Rob blasting her for supposedly having sex with “over 20 men” while they were together:

I’m still waiting. I’ll let you know when I do have sex with that many people. But I didn’t.

On people blaming Rob Kardashian’s weight increase on their breakup:

What I think is that people react to things differently and like to express their feelings in certain ways. I don’t tend to use social media. So when that whole situation happened, silence for me is the biggest form of flattery. And I love to keep it moving unless I need to say something.

I mean, all I could say is ‘cool.’ Don’t get me wrong, he’s a great dude. Let’s not talk about it too much.

On Beef  With Rihanna & They’re Comparisons of One Another:

First of all, I love her. I think she is dope. And all these kind of comparisons, it’s kind of pretty flattering. But I know it’s not that. Being from London, there is only so much that you can learn about this person from this side of the pond. But it’s better to be compared to [Rihanna] than being compared to Shrek or somebody.

It’s rumors. It’s all rumors. Good thing is though, I’m doing my own thing, she’s doing her own thing. We don’t need to watch what each other is doing. We just do our own thing.

On the rumors that she had an love affair with Jay Z:

Don’t you dare disrespect Beyoncé like that ever again in your entire life.. You should know better than that. That’s just straight up disrespect, you can’t even go there. That’s not even a question.

On how she made a net worth of $145 million for herself:

Well, I don’t know. I guess I always wanted to invet since I was young. I have really influential [people], my dad’s friends are really kind of smart so I’ve always been around  them and strategizing.

On Rumors of dating Bruno Mars:

All I can say is Bruno is an amazing human being… It’s about the connection. The energy. The vibe!

On what kind of things she likes to use in the bedroom:

On why she has success overseas and not the U.S.

I think I haven’t spent enough time here. Honestly, I never released an album in the States before, ever. It was just one single I released out here and I think it got the buzz and got people bubbling about me. But this album for me is more about telling people Rita is Rita. And I think that was missing.

I didn’t do any TV shows and I didn’t do a lot of radio interviews. And I feel like I focused a lot of my time in the markets that did work. This time around I just wanted to tour the states. I was like, ‘Look, I want to release an album out there because I want to see the world, I want to see the people.’ I get inspired by you guys all the time. I love your culture, I love your food, I love how you guys dress.

On dropping out of school to make music that later got her noticed by Jay-Z:

I dropped out of school when I was 15. I started working in a sneaker shop so I could pay my way because my mom and dad were really disappointed because they are very traditional. Albanians are very traditional background so I didn’t speak for them for a few years so I kind of had to find my way. And then I got enough money to travel and play guitars and go around bars and sing. I would sing Destiny’s Child songs. Anything that anybody would listen to.

I needed to sing. I started writing some songs for other people. And one thing led to another because the music industry is tiny in the U.K. and then people started hearing my name and then it got to Jay Z.

On what you can expect from her album:

I’m a huge fan of Hip-Hop and U.K. Hip-Hop and U.S. Hip-Hop and it’s like completely different. It’s a culture that I’ve always been around growing up. I was always the white girl in my clique.

This album for me is going to be a surprise. Because we’ve got like DJ Mustard ( hot producer) on there which I wouldn’t usually do. And I got Diplo on there.

And there is stuff on there that people are going to be like, ‘alright, alright.’ So I can’t wait to see people’s reactions.