Lisa Bonet took to her twitter yesterday to express her feelings towards what her on screen dad Bill Cosby is going threw. In a strongly worded tweet Lisa sent out about karma we all knew exactly who she was referring to stating ” According to the karma of past actions, one’s destiny unfolds, even though everyone wants to be so lucky… Nothing stays in the dark 4ever!” This situation just got even more uglier.

Bill Cosby who is now 77, has been all over the media as of late for no good reasons at all. Several women has come forward accusing the well respected actor of sexual assaulting and raping them many years ago and as of late his on screen daughter Lisa Bonet has expressed how she feel about it but being that she didn’t say any names it definitely fits what bill is going threw right now. Could she have been a victim of Cosby’s supposed rape spree? 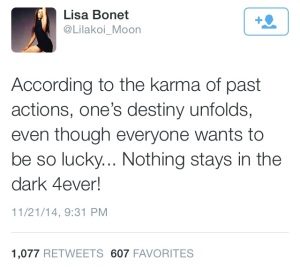 Raven Symone came forward to end all rumors of Bill Cosby allegedly raping her while she was on the show. A parody site sent out a ugly rumor that Cosby’s  on screen step granddaughter Raven had been sexually assaulted by him. Well Raven took to her social media to end all rumors saying “I was NOT taking advantage of by Mr. Cosby when I was on the Cosby Show! I was practically a baby on that show and this is truly a disgusting rumor that I want no part of!”