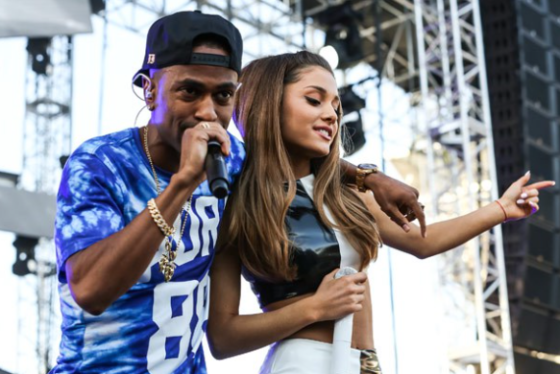 21 year old beautiful singer Ariana Grande has been seen getting mighty close to rapper Big Sean. They were spotted holding hands at the VMAs this past weekend backstage that made everyone raise the brow. The duo has a song ” Best Mistake” out together that when was performed Big Sean took the singer’s hand while performing his verse. After all the rumors and accusations Ariana has finally spoke out!

Ariana called into the Ryan Seacrest Show Today & Ryan asked her is she dating Big Sean? This is the singer’s response

“I mean, I guess, curiosity man, it’ll kill you,” she said. “I don’t know what to say, Ryan. Why are you doing this me?” Then she added: “I’ll tell you when we’re not on the air. I trust you. I’ve known you a long time. I don’t know about these millions of people listening in right now.”

So I guess we have our answer she’s most definitely dating Big Sean but doesn’t want us to know lol its okay Ariana We love you two together especially after you dating a guy who looks like he could be related to you and Big Sean dating a THOTPOCKET who dated him got engaged broke off the engagement then 3 months later she’s married to her supposedly best friend on the date she was suppose to marry Big Sean. So you two go ahead and be happy seem like you both are!

A source tells E!: “They have been friends since they made the song together. They have been spending more time together and recently have been getting very close. They are both doing great.”