Adam Levine Makes the popular page tonight (eastern standard time) My goodness ladies isnt he hot or what!! feel free to express how you feel below! lol these pictures has me on cloud 9 lol! 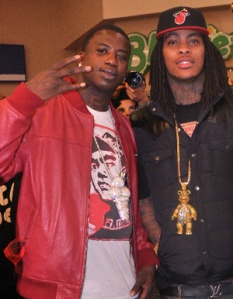 As you all know Waka & Gucci have fell out but no one knew why. Well Yesterday  Waka appeared on MTV’s Rap Fix Live and explained what had been going on behind the scenes this month. Stating that a real aggressive conversation over the phone is what made the exit happen. ” That Twitter wasn’t hacked because we had a conversation before that ,” said Flocka, who describe that convo was “Real aggressive with words like, ‘Nigga let’s get up. Let’s do this.'”

Waka doesn’t understand why Gucci’s calling him “disloyal” either. He also reminds viewers that he was involved in the Gucci Mane and Young Jeezy beef, pointing that he “risked his life.”

Waka claims that it was also impossible for him to be “dropped” off of Brick Squad 1017, being that he “owns a percentage,” in addition to his own Brick Squad Monopoly imprint. However, regardless of the business partnership, Waka stressed that he’s cutting all ties with his now-incarcerated partner. “It ain’t gonna never be no business, ever in life. No music or nothing. I don’t feel nothing he say out his mouth.”

But Flocka did say that he did not “wish jail” on anybody and point out that Gucci may have lessons to learn though, & adds “I greet fans he punches fans. It’s a difference.”

This morning it was reported that Gucci Mane was denied bond after an arrest this week. He is expected in court next month. 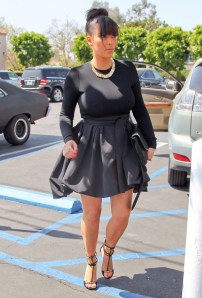 I love Kim and I’m so happy for her and Kanye expecting their little bundle of joy. What I’ve been disappointed in is her choice of attire. But I’ve excused it because being a mom myself and fashionista it’s hard to adjust to the weight gain fashionably. While I was pregnant and living in sunny Florida you want to wear shorts but all the maternity shorts were ugly lol.  Or you want to wear dresses but don’t want to look classless or people saying she’s pregnant why is dress so short or so tight. But as of lately it seems as if Kimmy has gotten it together. She’s back to being that flawless Fashionista we all love adore and admire! Here are a few looks that I admire and states she has gotten it together! Enjoy! 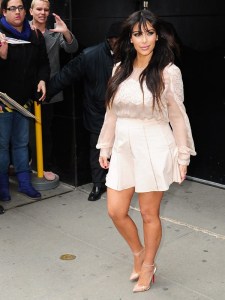 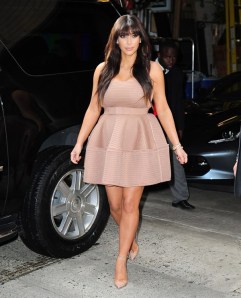 Milwaukee Bucks guard Brandon Jennings was upset at coach Jim Boylan’s decision to bench him during the 4th quarter of last nights 100-92 loss to the Philadelphia 76ers. Jennings said he feels he is being singled out by Boylan.

Jennings was held scoreless for the first time in 281 career games, missing all three of his shots while playing just 17 minutes against the 76ers. It marked the second rough game in less than a week for Jennings, who scored four points on 1-of-15 shooting in a loss to the Indiana Pacers on Friday.

“I don’t see any All-Stars in this in this locker room, ” Jennings said.

“I think that everyone should be held accountable,” Jennings said. “There’s no maxed-out players in this locker room. So don’t try to put me on a pedestal and just give everyone else the freedom to do whatever they want.”

Boylan defended his decision to remove Jennings, who was replaced at point guard by Monta Ellis.

Just when we had hope for the Lakers the team loses one of their strongest players. Metta will miss at least SIX weeks to undergo surgery to correct a torn meniscus, said the team in their statement.

“I was hurt because Metta, he’s been strong all year, He hasn’t really had that many problems and then he gets hit with a serious injury. It just seems like all year when somebody comes out [off the injured list], somebody goes down. So, it’s kind of tough and to see Metta go down, it kind of hurt.” says Dwight Howard about the lost to their team’s roster.

WE HERE AT STILETTOSNHIPHOP WISH YOU A SPEEDY RECOVERY METTA! BE STRONG!

The Los Angeles Lakers’ may be in some trouble getting to the play offs even more with Metta World Peace receiving an MRI exam in Minneapolis that showed a cartilage tear in the lateral meniscus of his left knee. He will return to Los Angeles, where he will be examined Today by the team’s doctor Steve Lombardo, forcing him to miss tonight’s game against the Timberwolves. An update, including a timetable for his return, will be issued at the conclusion of his examination, according to the team.

“Sorry bout the injury, First ever knee injury. Recovery time hopefully is a week and a half.” – world peace tweeted then deleted

In another tweet, World Peace wrote: “I can’t wait to get back. But our team is so good We will win and get into the playoffs.” …hmmm glad he has some hope and confidence in his team!

World Peace had been the only member of the Lakers’ season-opening starting lineup yet to miss a game because of injury this season. World Peace has played in 70 of L.A.’s 71 games (sitting one due to suspension) and averaged 12.8 points, 5.1 rebounds, 1.5 assists and 1.7 steals per game. We at StilettosNhiphop him a speedy recovery!

Last night XXL revealed their 2013 freshman list and in my opinion this list had a WACK beginning but it grew on me after careful research! But lets begin with the Con’s, How many times will Schoolboy Q be a FRESHMAN? He’s more of a senior who keeps getting held back if you ask me. Then there’s Kirko Bangz im not understanding why he’s on the list either, when “drank in my cup” was released TWO years ago & he’s had major hits after that, him being on the list is like a slap in the face to his work and hustle if you ask me. Travi$ Scott who is Travis Scott? I tried doing research and nothing but his twitter,tumblr, a youtube video & a bunch of other miscellaneous things came up. I see that i’m not the only one who’s questioning who this artist is because someone tweeted asking him who he was and he responded “your daddy” well daddy can you give us some music worth knowing who you are? Thanks!

But on another note there are some understandable freshmen on the list to me. Beginning with Trinidad James highly understandable being that he just got into the rap game and is having a successful year. A lot of people are questioning why Chief Keef? Well why not? He’s a newbie to the rap game and has had major success. Everyone saying why Sosa? well when he does decides to spit he has something to say and don’t act like you weren’t captioning things “thats that sh*t I don’t like or ” these b*tches love (add your name here) LOL lets be real here. Joey Bada$$ im happy to see him on the list he’s def bringing the 90’s back to hip-hop giving us the REAL hip-hop sound that we’ve been missing, Ab-Soul another new artist bringing us that REAL hip-hop sound we been missing he gives me that eazy-e feel!, Action Bronson is no new face but the fact he’s just now getting signed to warner bros late 2012 is what makes him on the list understandable and the guy got bars, Angel Haze so happy to see the young female MC here she well deserves it it’s been a long time coming and she grinds hard! Love to see my ladies gettin it!, Dizzy Wright thats a no brainer if he wasn’t on the list I’d really question who’s behind this list because clearly you dont know hip-hop.  Now Logic I didn’t know who he was before research and im really feeling his music I can understand why they placed him on the list as well. Leave me comments below and tell me what you think of the list!

It may have been all love between the dipset crew at the “Diplomatic Immunity” anniversary yesterday night in NYC, but during Waka Flocka’s performance he confirms the rumors of an allege falling out with him and rapper Gucci Mane. While performing his verse on Jim Jones “848” record he replaced his line ” Free my brother Gucci ” with “F*ck that nigga Gucci” .

I assume Waka’s anger come from a tweet Gucci made earlier this month stating that Waka had been dropped from his record label 1017 Brick Squad. Shortly after the tweet was created a Warner Bro’s rep made reports that Gucci’s twitter account had been Hacked. I guess we see that, that was a lie. I dont know whats going on with Gucci but the man has lost his mind obviously.

Gucci Recently made the headlines after a physical altercation with FANS. Last week Gucci reportedly HIT a FAN with a CHAMPAGNE BOTTLE at the Atlanta night club Harlem Nights! Also a man has come forward saying that the rapper attacked him as well. I dont know what drug Gucci is on but he needs to put it down, he’s acting like a mad man! The Video of Waka dissing him is down below!

A little trash talk before facing the Miami Heat has not yielded desirable results of late. So i guess the Chicago Bulls is going with the “kill them with kindness” method.

The Bulls, who will try to end the Heat’s 27-game winning streak Tomorrow at the United Center, have made sure to give the defending NBA champions the utmost respect.

“It’s an impressive streak, Obviously, they’re playing at a high level every night. It’s not an easy thing to do in this league.” says point guard Kirk Hinrich.

Not everyone is happy or respecting The Heat’s winning streak, Bostin Celtics guard Jason Terry tried recently said that he was “not really impressed” with the Heat and their streak (sounds like a hater if you ask me LOL ). When the Heat and Celtics met a few days later last week, Terry was on the ground looking up at a powerful Lebron James dunk that will go down in history. The Heat floored the Celtics keeping the winning streak alive! The Heat’s winning streak is now the second longest in NBA history and is just six away from matching the NBA record of 33 straight by the Los Angeles Lakers in 1971-72. Im a lebron fan have been for about 5 years now and im very happy to see his success he’s worked hard and has grown as a player. Keep up the work heat nation!

The Queen B will be headlining a concert for Gucci’s “Chime For Change” in London this summer.

Beyonce- who is the co-founder of Chime For Change and the concert and creative director – will take to the stage on June 1 2013 to raise money for the female empowerment charity. The event will be broadcast globally, and will also feature performances from Florence + The Machine, Ellie Goulding, Iggy Azalea, John Legend, Rita Ora, Timbaland and Laura Pausini.

“Our goal is to call for change for girls and women in the loudest voice possible,” I am excited for us to come together on June 1 to bring the issues of education, health and justice for girls and women to the world stage ” says Beyonce at the press conference this morning.

Gucci are funding the show, and all profits from ticket sales will go towards the charity, which fights for better health, education and justice for women. Tickets will go on sale on March 27 2013 at 9am. Fans will have the chance to choose which charity the tickets will be donated to.