I am honored to be contacted by a very prestigious campaign to feature them on my site by the name of the “No Homo-phobia” Campaign to fight against homosexual bullying. As a child growing up with two homosexual relatives (my brother and sister) I experienced homophobic bullying,  from peers at school having to deal with verbal abuse  like  ” thats why your brother is a fagg and youre going to grow up and be a fagg”  and watching my brother having to physically fight other men because of his choice of sexuality. I didnt know as a child this was going on all over the country and even worst from slaying and slaughtering men all over the world for being homosexual. Watching my sister getting criticized by church members yes CHURCH members…they turned a child away because of their choice of sexuality. I’ve also witnessed homosexual slurs and bullying through out the music industry ,one incident to be exact was a twitter argument between “John Boy” a rap artist signed to rapper & ceo of SODMG record label soulja boy  & a rap duo whom where a homosexual male and female that totally disguised me. The artist said ” NO DISRESPECT TO ANYBODY’s SEXUALITY, but no label will sign a boy and girl “Gay  & Bi” Rap duo…wtf kinda shit are they rappin bout dildos?” . I come from a home where we were taught to have a open mind because everyone is DIFFERENT and just because they are DIFFERENT doesnt mean that they are WRONG! I dont see a problem with someone being different than I am… in fact i embrace it… i believe in love and love.  ! So I must share with you guys the interview I had with the founder and ceo of the  No Homo-phobia campaign I hope after this a lot of minds and hearts will change and people will become more active in the campaign against “homosexual bullying” Lets stop the bullying!

SNHH: What made you begin the NoHomo-phobia campaign?
NH: I began this campaign, because after dealing with and hearing about alot of personal cases of homophobic bullying. I was tired and wanted to wanted to become the voice. Alot of people who are bullied don’t speak out about it. Thats why i created it. To be the voice of those who remain silent.
SNHH: How long has the no homophobia campaign been active?
NH: The campaign has been atice since June 2012
SNHH: Being a homosexual male do you believe that homosexual women have it easier?
NH: I do believe on the outside looking in, they do have it easier. Heterosexual men find it entertaining when two women kiss. Television will air a scene of two woman before they air a scene with two men. People love when Madonna and Britney kissed. But hated when Adam Lambert kissed a guy on stage at the AMA’
SNHH: You were homeless at a young age how did you conquer that?
NH: Yes! My mother and I was homeless and stuggled together when i was 15. I wasnt a saint as a teenager. I found myself living from place to place, But luckely God sent me a very good job and I was able to get an apartment at 17 yrs old. I worked consistently. I realized working my ass off at 17 kept me active and off the streets.
SNHH: How far are you trying to take your campaign?
NH: I’m trying to take this global and to mainstream success. i want to be able to give other opportunities within my business later in life. S/N Jay-Z and Kanye are two of my biggest inspirations in my life.
SNHH: Why do you believe people have so much hatred in them towards homosexuals?
NH: This goes back to New and Old Testiment. I will not disagree that’s its a sin to be gay. But I will say that people act as if being gay is more of a sin than murder,sex before marriage, etc. I just wish people see it from our point of view. Thats why I’m working on bring an all gay cast reality in the near future. (wink)

SNHH: What in store do you have next to get your campaign and your voice heard?

NH: Major celebrity photo shoots when them supporting my cause by wearing my shirt, Youtube webisodes of my life, traveling to different cities to public speak to to children that deal with bullying and homophobic bullying. Alot of people find out that when they purchase my shirts, a portion of the proceeds goes to multiple Aids awareness organizations. Participating to in alot of Aids walks. Also writing a book. And bringing a reality show near you!
SNHH: What would you tell people who are afraid to come out?

NH: Never hide that person that’s inside of you. Let people get to know the person who dances to Beyonce in your room is lol. People accept you more when you be yourself. Remember GAYS RULE!! LOL 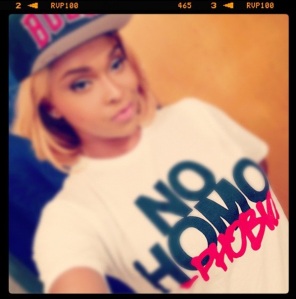 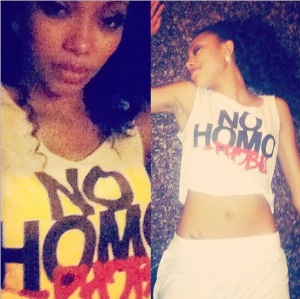